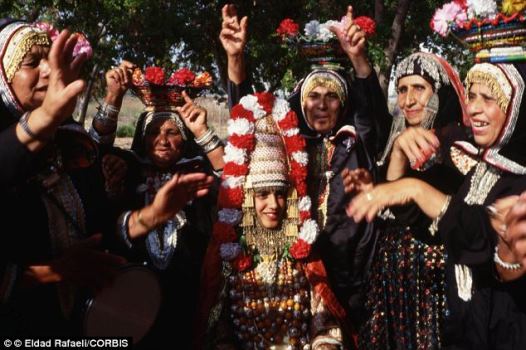 An eight-year-old child bride has died in Yemen of internal bleeding sustained during her wedding night after being forced to marry a man five times her age, activists have claimed.

The girl, identified only as Rawan, died in the tribal area of Hardh in northwestern Yemen, which borders Saudi Arabia. Activists are now calling for the groom, who is believed to be around 40 years old, and her family to be arrested so they can face justice in the courts.

They say arrests would help put a stop to the practice of marrying very young girls to older men in the impoverished region.
Angry Man, a blogger, posted that the man was ‘an animal who deserved to be punished severely for his crime’.
‘All those who supported such a crime should also be punished,’ he added.

Another blogger, called Omar, wrote: ‘Rawan’s family members are not humans. They do not deserve to have children.’
But another blogger, called ‘Sad’, appeared more sympathetic to the custom. He wrote: ‘Her family and her groom could have waited for some time before having this marriage,’ Sad said. ‘It was not fair at all and the marriage should not have happened even if some tribes believe that it is a good custom.’

The practice of marrying young girls is widespread in Yemen and has attracted the attention of international rights groups seeking to pressure the government to outlaw child marriages.

Yemen’s gripping poverty plays a role in hindering efforts to stamp out the practice, as poor families find themselves unable to say no to ‘bride-prices’ that can be hundreds of dollars for their daughters.
More than a quarter of Yemen’s females marry before age 15, according to a report in 2010 by the Social Affairs Ministry.

Tribal custom also plays a role, including the belief that a young bride can be shaped into an obedient wife, bear more children and be kept away from temptation.
In September 2010, a 12-year-old Yemeni child-bride died after struggling for three days in labour to give birth, a local human rights organisation said.

Yemen once set 15 as the minimum age for marriage, but parliament annulled that law in the 1990s, saying parents should decide when a daughter marries.