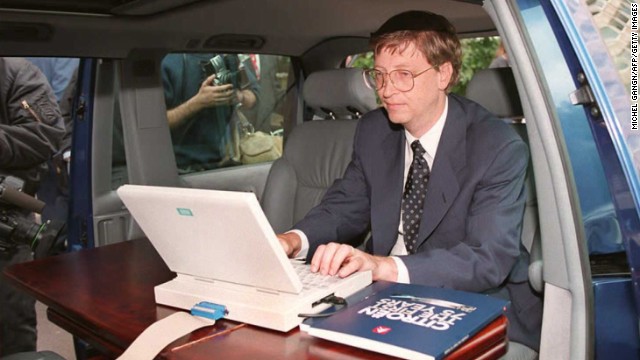 If you pressed Control-Alt-Delete to log on before reading this, Bill Gates says he’s sorry.

The Microsoft founder says the triple-key login should have been made easier, à la Apple’s Macs, but that a designer insisted on the more complicated step.

“We could have had a single button. But the guy who did the IBM keyboard design didn’t want to give us our single button,” Gates said Saturday during a question-and-answer session to launch a Harvard University fund-raising campaign. His comments have gained attention since a video of his Harvard Q&A was posted on YouTube on Tuesday.

Smiling, Gates tried to follow through on the thought, noting it was a basic security feature. But he eventually surrendered to common sense.

“And so we had … we programmed at a low level that you had to … it was a mistake,” he said, throwing up his hands to laughter and applause from the crowd.

Gates defended innovation on the earliest Microsoft software though.

“We did some clever stuff,” he said. “We were able to experiment with a lot of stuff, but more on the software side than the hardware.”

Long the first interface step for PC users, Control-Alt-Delete still exists in Windows 8 as a way of either locking the computer or accessing the control panel. While the system defaults to a log-in screen, users may tweak their settings to return to the old way of logging on to Windows.

Sometimes informally called the “three-fingered salute,” the login required users to use both hands and was intended to avoid accidental keystrokes from rebooting a computer.

Engineer David Bradley, a designer on early IBM computers, said he invented the combination as a shortcut during development.

“I originally intended for it to be what we would now call an Easter egg — just something we were using in development and it wouldn’t be available elsewhere,” Bradley said while appearing on a 2011 panel that included Gates. “But then (software publishers) found out about it. They were trying to figure out how to tell somebody to start up one of their programs, and they had the answer. Just put the diskette in, hit Control-Alt-Delete, and by magic your program starts.”

He then tried to deflect what he perhaps wryly called “credit” for its continued use.

“It was like a five-minute job in doing it. I didn’t realize that I was going to create a cultural icon when I did it,” he said “… I may have invented it, but I think Bill made it famous.”